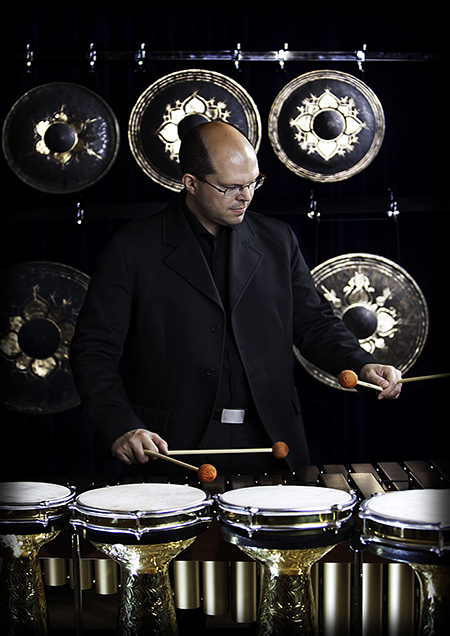 Born into a family of musicians, Swedish percussionist Daniel Saur’s future was predestined: a life in music!
He focused his musical studies on percussion early on, and studied at the Music Conservatory in Falun, before joining the Royal Swedish Army Band. After studies at Framnäs Folkhögskola he later completed his Master of Music degree at the School of Music in Piteå in 2000 and has since then worked as a freelance musician and percussion teacher.

Daniel is a founding member of the professional percussion ensemble Global Percussion Network (GPN). With GPN he has given performances, seminars, and master classes throughout Europe, North America, and Asia, including radio and television broadcasts in Sweden, USA, and Japan. GPN has performed at festivals all over the world, premiered countless pieces, played entire concerts on ice instruments, and even performed on a Jet Fighter from the Royal Swedish Air Force.

Norrbotten-NEO (NEO) is one of Sweden’s leading ensembles for contemporary music, where Daniel is a full time member since 2008. NEO has a core ensemble of seven musicians: flute, clarinet, percussion, piano, violin, viola and cello. The ensemble focuses on commissioning new works from the leading composers of Swedish and Europe. Daniel´s employment in NEO also includes serving as timpanist in the Norrbotten Chamber Orchestra and percussionist in Piteå Chamber Opera Company. Because of these diverse ensembles, Daniel regularly performs everything from Mozart symphonies, contemporary music to grand, multi-media opera shows.

Since 2001 Daniel has been the Director of Percussion Studies at the School of Music in Piteå at Luleå University of Technology.
Prior to this angagement he ran the Percussive Institute at Framnäs Folkhögskola from 2004-2007.
Additionally, during 2007 Daniel had a 6-month residency at Universidad de Ciencias y Artes de Chiapas (UNICACH) in Chiapas, the southernmost state of Mexico.

As a composer Daniel has received numerous commissions and has had his works premiered in Argentina, Japan, Mexico, Sweden, and USA.

Daniel is a proud endorser of Innovative Percussion Inc.